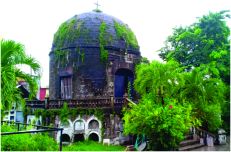 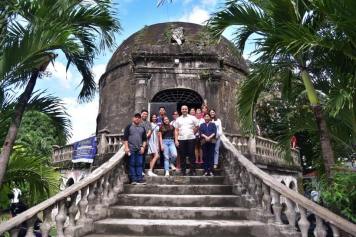 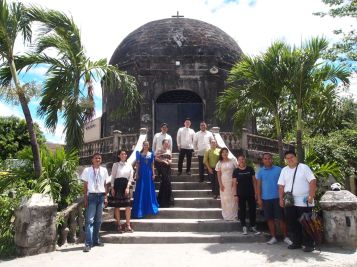 The Simborio is an important cultural property of Taguig located in barangay Tuktukan, Taguig City. It is situated (long.14.5293423 lat. 121.0730018) at the entrance portion of a 2.5 hectares Roman Catholic Cemetery owned by the Archdiocesan Shrine of St. Anne under the supervision of Diocese of Pasig.

This significant immovable and tangible heritage site was constructed around year 1700 by two hundred (200) Taguig polistas under the supervision of Spanish friars particularly by the Order of Saint Augustine (OSA) Priests through forced labours or polo y servicio. Based on the records of the Augustinian in the Philippines, Simboryo or Cementerio del Globo is considered as one of the oldest Historical Landmarks continually to exist today in the Philippines.

The dome shape structure was made of undersized adobe stonewalls bonded by lime, egg white and clay. The entire measurement of the simborio is 173 square meter and 8 meter in height. The dome itself or domo has a diameter of 4 x 4 meter. A snake shape symbol is visible at the top of the main door and a cross at the top of the dome of the simborio.

You have to climb at the flaring staircase ringed by an elegant balustrade at the top. The stairs were composed of 11 steps. In Spanish era (under in their beliefs oro, plata, mata) it was fall in plata, meaning silver. An altar located inside the structure with image of Jesus Christ in the cross can be found. The site is surrounded by tombs and some vegetation.

The Simborio or cimborium is the centerpiece of the cemetery and serves as a chapel for the final blessing of the departed before it was finally laid into rest. The place is also used as repository of bones since time immemorial. During the Spanish era, Insulares and Peninsulares were the only people allowed to be buried here.

Illustrados and indios were strictly not allowed. But after some time, it is said that some El Gobenadorcillo, Parish Priest, and Alcalde Mayor were allowed to be buried at the site. One of them is Alcalde Mayor Jose Pagtakhan, he served as Mayor of Taguig from 1916 to 1925.

The story associated with the site is an underground tunnel under the Simborio that was said connected to the altar of St. Anne church. The said tunnel also serves as escape way or hideouts of soldiers and inhabitants during the American colonial and Japanese occupation period. During the Japanese occupation of February 25, 1945, thirty (30) Japanese soldiers hide and were captured here by the Hunters ROTC guerrillas of Taguig headed by the group of Lt. Vic Estacio.

In 1963, a flood occurred at the cemetery which causes the fishes (tilapia) to swim across the site and ate fresh cadavers. Because of this, the Simboryo was also dubbed as Bangkay Street. During night time, some residents around the area said, they have experience some supernatural occurrences at the Simborio, like seeing ghosts, a headless priest, white lady and tikbalang. But some described this only as popular folklore stories.

During the martial law period in December of 1972, the site was closed from the public access because of the excavation project including the back area of St. Anne church where the altar is located. Gold and other treasures were the purpose of the two (2) platoons of Philippine Army personnel who spearheaded the digging at the area that lasted until February 1973. Now, the tunnel was already covered with concrete for security reason.

The condition or status of the simborio is continuously deteriorating. Some of these are due to impact of people roaming in the area. They vandalized the Simborio and sometimes left their garbage around the surroundings. Other threat considered is the constructions of a mall in the proximity that makes the integrity of the structure of Simboryo to quiver. Also, the huge trees beside the Simborio which makes the roots of the trees, penetrate within the core structure of the Simborio.

Some measures to protect and conserve the simborio were made in 1980 and 1993 by the church through the support of the local government of Taguig, but the original feature of the simborio was maintained. Lately, the Diocese of Pasig has made some major renovation and improvement at the cemetery which include the demolition of old tombs to give room for the construction of an apartment type columbarium. Installations of lights were also made. Security personnel are also assigned to protect the site from vandals and trespassers.

The Simborio is an important Cultural property of Taguig that deserves a national recognition and should be listed at the Philippine Registry of Cultural Property (PRECUP) as National Historical Landmark.